Monthly meetings are held the 3rd Saturday of each month at 9:00 am. 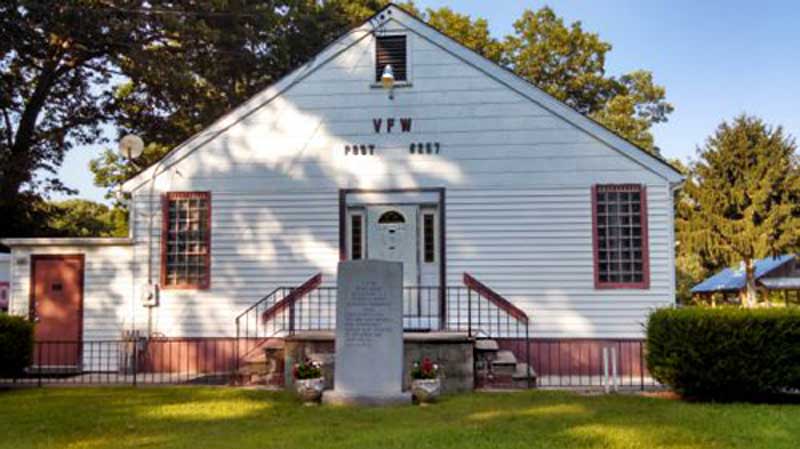 Veterans of the Spanish-American War, the Philippine Insurrection of 1899 and the China Relief Expedition of 1900 returned home to a public that had grown indifferent after cheering them into battle in 1898. Feeling estranged from the society they had left as boys to join the Army, as men they drew together into organizations to preserve ties of comradeship that had been forged in mutual hardship and danger.

One such group was the American Veterans of Foreign Service which was formed in Columbus, Ohio on September 29, 1899. Also, in 1899 an organization which called itself the Colorado Society, Army of the Philippines was founded.

Then, during 1901-1902 in Philadelphia, Pittsburgh and Altoona, Pa., three other veterans groups were formed. These three merged in 1903 and also took the name of the American Veterans of Foreign Service although there was no formal connection between them and the Ohio organization. Such a connection was made, however, in 1905 when the Ohio and Pennsylvania organizations met in Altoona and drew up an agreement of merger.

During the years that followed, the Army of the Philippines in the West and the American Veterans of Foreign Service in the east expanded rapidly. It became apparent to the leadership of both organizations that they could be more effective together. They agreed to hold their National Encampments (as conventions were then called) together in Denver, Co., in 1913. There, another merger took place. The resulting organization was named Army of the Philippines, Cuba and Puerto Rico. This name was then changed to Veterans of Foreign Wars of the United States at the 1914 National Encampment in Pittsburgh, Pa.

Now with 10,700 posts scattered around the world, the VFW maintains its character as a National organization through a variety of meetings on different levels. National Conventions are held each year in one of the major U.S. cities, usually in the latter part of August. The location is rotated geographically so members in all parts of the country may participate.

Today, the VFW is the fastest growing major veterans organization. Its membership has increased by more than half a million members in the past 15 years and stands at over two million. Most of its 10,700 posts are located in the United States but others are in such places as Germany, Thailand, Okinawa, Korea, Taiwan, Japan, Guam, the Marshall Islands, The Virgin Islands, Puerto Rico and one of the oldest is located in Paris, France. 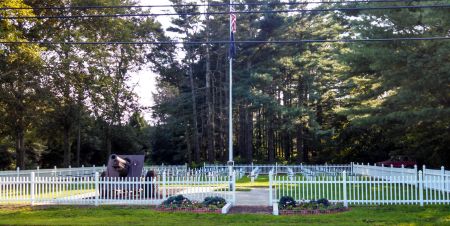 On December 7, 1941, a stunned nation listened as the news came across the airwaves that Japan, in a surprise attack, bombed Pearl Harbor. Over the next four years, the people of the great Nation would pull together as they have never done before. The pride and commitment of the American people would rise to its peak and thousands of American men and women would answer their Country’s call.

In the small community of Belleplain, that call was heard clearly as it echoed across its farmlands and deep within its forest. This small community with its population just slightly over two hundred would see twenty five of its men, one-eighth of it population, answer that call. Those of age would readily enlist. Others would quit school and obtain their parents’ permission to follow those who left before them. Families like the Polises, the Repicis and the Petrellas watched as son by son and brother by brother left home to face an uncertain future.

The people of the community united and rallied around those men who soon would become their war heroes. The Sunshine Club of the United Methodist Church presented each of the men with a pocket sized copy of the New Testament. Friends and neighbors like Rebecca Harris wrote letters and sent cards to those who were so far away from home.

An honor roll was erected displaying the names of the local men who were serving their Country abroad. It was a tribute to their courage, their commitment and to the many sacrifices that those men were willing to make.

Those who lived in the community saw more than just names on the honor roll. They saw the children who played kick the can on streets in front of their homes; the teenagers that hung out at the local pool hall; the young men who cut cord wood and who worked at the basket factory or the saw mill; the sons who tended their chores on the family farms. But before the war ended, the community would see the lives of four local families changed forever. 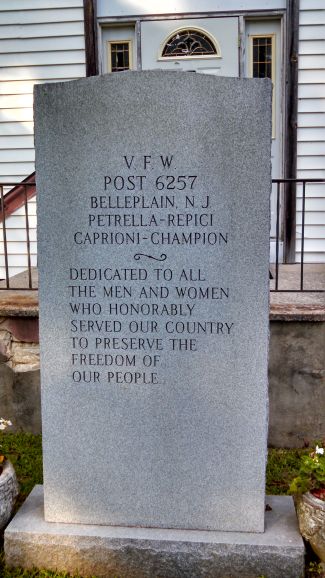 In the fall of 1945, Mr. Nicholas Mazzie was visiting with the Macellaro family. Mr. Mazzie, an uncle to Frank Macellaro, stated that since Belleplain had so many men who served in the war, they should form a VFW Post. Mr. Mazzie, who was already a member of a VFW post in Camden County, obtained the necessary materials that would be needed to get started. Together with Mr. Mazzie, Frank Macellaro and Dominic Lorenzo started to sign up twenty five men that would be needed in order to petition the National organization for a charter. By January of 1946, thirty three men were signed up and soon would become the chartered members of the Post.

Since the Post would fall into the boundaries of the Ninth District (Cape May, Cumberland and Atlantic Counties), a meeting was scheduled with Comrade Frank Harbert, Ninth District Commander and Comrade William Jeager, Tri County Council Commander. At that meeting, the members stated that they wanted to name the Post in honor of the four men from Belleplain who were killed in action. Additionally, the names would appear in order in which the men met their demise. But they were told that no more than three names could appear on the charter. So it was finally decided to name the Post after the first three men: Joseph Petrella, Frank Repici and Thomas Caprioni.

After selecting the name, the application for the charter was completed and forwarded to the National organization for approval. On February 21, 1946, the Petrella, Repici, Caprioni Post was granted a charter by the National organization and was issued post number 6257. A meeting was held on March 14, 1946 at the Patriotic Order Sons of America Hall for the purpose of electing the Post Officers. At that meeting, it was decided to continue to meet at the Patriotic Order Sons of America Hall on the first and third Thursdays of each month.

One week later on March 21, 1946, Comrade Frank Harbert, Ninth Distrct Commander, instituted the Post. The obligation was given by Comrade William Jeager, Tri County Council Commander and the Post Officers were installed. The Petrella, Repici, Caprioni Post 6257 was officially mustered into the Veterans of Foreign Wars of the United States.

It was not until two and a half years later, through the efforts of Mr. and Mrs. Leleand Champion and Commander Frank Polise Jr., that a letter was received in regards to adding the name of Leland Champion Jr. to the Post charter. In that letter, dated July 28, 1948, State Commander Frank Andrews stated that, “the Post didn’t receive proper instructions when they were being organized” and “that this whole affair has been a misunderstanding and unintentional”. At the following meeting, held on August 19, 1948, the membership voted and unanimously approved to add the name of Leland Champion Jr. to the Post charter. On August 30, 1948, the National organization approved the charter change and the name of the Post was officially changed to Petrella, Repici, Caprioni, Champion Post. 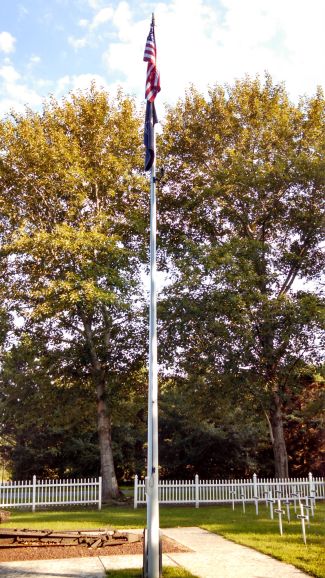 The quest for a Post home started on October 17, 1946, when Carl Mason suggested that the members build their own hall. He stated that Mr. Thomas J. Durill had a nice piece of property that was located between Frank Polise’s house and the fire tower. After a brief discussion, Frank Polise Jr. made a motion that Adjutant Eugene Petrella send Mr. Durill a letter asking him if the Post could purchase the property and at what price.

At the following meeting, Commander Dominic Lorenzo informed the members that Mr. Joseph Germanio offered to donate two building lots that were located at the junction of Belleplain/Eldora Road and Macellaro Road. In addition, Mr. David Caprioni offered to donate one building lot located on the Belleplain/Woodbine Road. With that information, the members readily agreed to accept one of the offers extended to the Post. On November 2, 1946, by a vote of fifteen to four, it was decided to accept the two building lots that were offered by Joseph Germanio.

At the meeting on February 6, 1947, Frank Polise Jr. told the members that he felt the vote was taken a bit too hastily because they were looking at the size of the property and not the location. He stated that it would benefit the Post and the community if the hall was built closer to town rather than the outskirts. After a lengthy discussion, the matter was tabled. It is uncertain when or if a new vote ever took place, but the minutes of November 20, 1947 read, “A letter of thanks will be sent to David Caprioni, who donated the building lot.”

On December 4, 1947, Commander Dominic Lorenzo appointed Frank Polise Jr., Angelo Repici, James Petrella and Thomas Germanio to the building committee. However, due to the harsh winters of those days and the busy summers that consumed most of their time, ten more months would slowly slip away. Finally, in October of 1948, the members started to clear the land and the layout of the hall was designed. At first, the hall was to be 42 feet wide and 76 feet long with a kitchen and rest rooms all on one floor. However, in order to cut costs, it was finally decided that the hall would be 32 feet wide and 62 feet long with a full basement, where the kitchen and rest rooms would be located.

In March of 1949, the basement was dug. Mr. Springer from Cape May Court House was hired to lay the block. Mason’s Saw Mill was busy cutting floor joists. Over the next two months, the members worked long hard hours as they watched their dream slowly become reality. Finally, on January 19, 1950 and in front of a blazing fire place, their first meeting was held in the Post home.

Since those early days, more ground has been purchased, additions have been added and many major improvements have been made. But most important of all, it is realized that it is more than just a building; it is a living monument. A monument that is dedicated in memory of Joseph Petrella, Frank Repici, Thomas Caprioni and Leland Champion Jr. A monument that pays tribute to every American man and woman who have served their Country during all wars, conflicts and hostilities. A monument that honors all members, present and past, whose pride in their Country and their commitment to their follow comrades has never diminished.

From The Congressional Charter Granted To The Veterans Of Foreign Wars

“The purpose of this corporation shall be fraternal, patriotic, historical and educational; to preserve and strengthen comradeship among its members; to assist worthy comrades; to perpetuate the memory and history of our dead and to assist their widows and orphans; to maintain true allegiance to the Government of the United States of America and fidelity to its Constitution and laws; to foster true patriotism; to maintain and extend the institutions of American Freedom and to preserve and defend the United States from all her enemies, whomsoever.”